Why No Flowers at a Jewish Funeral? 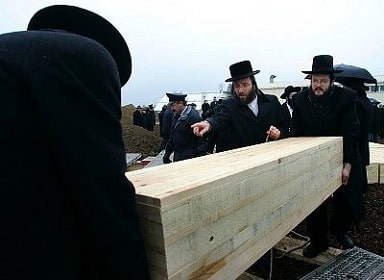 The Reason Behind No Flowers at a Jewish Funeral

Flowers are not deemed as an appropriate gesture of sympathy in the Jewish community. Some Jewish cultures believe sending flowers out of respect interrupts the mourning process.

However, you can send a potted plant to the family, months later, that is. A recommended sympathy flower to send is a Peace Lily.

Reasons for No Flowers

The simple way to explain why no flowers are allowed at a funeral is mainly tradition. Flowers were scarce because they lived in areas that consisted of desert climates. The lives of Jewish people have varying customs and traditions that are not shared. Instead of flowers, they would use stones or small rocks.

Jewish faith does not use flowers out of respect. It is believed that everyone deserves an equal funeral free from expressing wealth. Flowers are feared to make people believe that they are of higher classes. No flowers are present at all on the graves.

Jewish families would preferably have money spent on flowers to go towards something that is more important. If you look at this way, a flower’s life expectancy is not long. Small stones are used more at Jewish graves rather than flowers. Stones last forever, leaving a lasting impact.

What to Expect at a Jewish Funeral

If you are ever attending the funeral of someone who was Jewish, here are some important facts that you should be aware of. Jewish funerals are very different. They are quick. It is believed a quick burial is one of the most important ways to honor the deceased. Leaving a body without burying it is considered disrespectful.

At a Jewish funeral, there is no viewing on the body. Instead of a casket, the body is put into a box made of pine with holes cut in the bottom. The funeral is brief, reading psalms, saying prayers, and the reading of a eulogy. Jewish funerals are meant as a mourning process and celebrating life. The funeral service is held at either the graveside, synagogue or the funeral home soon after the readings have ended.

Unlike some traditional funerals who wait days trying to set up all the plans, a Jewish funeral takes place in 24 hours. From the time of death, the body of the deceased is never alone until the funeral has ended. Someone will sit with the body reading psalms.

Jewish funerals only last up to an hour, but the time-length of a funeral varies depending on how well known the deceased was. After that, the family will take part in practice by the name of Shiva which is a period mourning that lasts for 7-30 days.

What Happens in the Bereavement Period

For seven days the family remains at a home in the shiva house, mourning together. Prayers are recited, along with rituals, and traditional mourning practices. During those times different members of the family, friends, or other members of the community can make a condolence visit to pay respect.

Mirrors are covered after a person has died. Jewish culture does this because of superstition, and to pay more attention to God than themselves during this time of mourning.

After the seven day period has been completed, the family will continue the traditional mourning period and continue certain traditions for 30 days or up to a year.

What Can You Do as a Way of Respect?

You can still express your condolences, only not through flowers. What you can do to show your support is to provide food and meals, visiting a Shiva, or sending a condolence basket filled with fruit, chocolate, or nuts. Families may not want to cook during this time, instead of easily already prepared meals for them to eat.

Always make sure the check the dietary needs of the family before sending food to avoid any allergic reactions. Gift cards to the restaurant can work as a condolence offering. Then the entire family can go out for a meal.

Other than sending food you can also attend events out of respect. Attending the funeral is a nice gesture to help support the family in this difficult time. Then, you can also visit the family in the Shiva while they are in the grieving process. Share a story, and just be there. It doesn’t matter if you don’t have a clear idea of Jewish Culture. It’s a way to learn.

Aside from attending the funeral, or sending food, you can also pay your respects by offering to do regular chores for them. Go out and shop for them, help with cleaning the house, and send a ‘thank you’ card. Kind words make an enormous gift from the heart. Anyone can remember kind words forever.

Make a donation in honor of the deceased to a special charity. Decide on where you should send this donation and think about the reason behind why you are sending it. Donations come from the heart.

What Happens if Someone Does give a Flower?

Not much is known about what happens to someone if they do end up sending flowers out of condolence to a Jewish funeral. What’s important is that one should always respect someone’s wishes or culture. If a family does not want flowers, then don’t send them. It is not recommended to send flowers to a Jewish funeral. It’s a bad sign of disrespect.

WHAT ARE THE DUTIES OF UNDERTAKER IN SINGAPORE?

How Much Should You Spend on Flowers for a Funeral in Singapore?