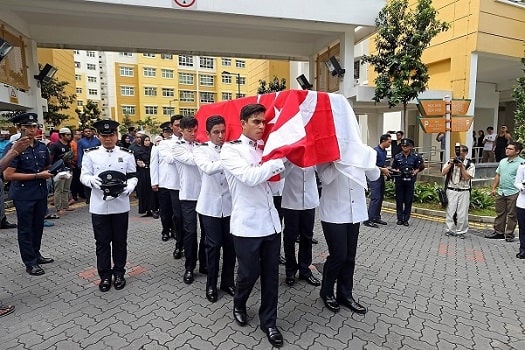 Singapore is a land of variety is all aspects and directions. It has a diverse type of beauty, technological development and it has rich culture and rituals as it has many religions and cultures residing in this small piece of land. Due to this diversity, you can experience many things you have never seen before. The manner of living as well as the ways of funerals and wakes are also of various types according to the religions of its residents. This is also one of the traditions of every great nation of the world that they remember and acknowledge their heroes. They never forget the sacrifices made by them and they are given a proper reward, regard and esteem. Singapore also pays tribute to its heroes who gave their lives for the sake of humanity as well as a homeland. The person who gives his life during his duty, he is given respect by people in general and politicians and ministers specifically who visit the family of the gone persons and condole them and participate in their grief and sorrow. Though Singapore does not highlight much or glorify the sacrifices which are made and does not made statues in their regard but yes like every great nation it pays tributes and gives awards to its heroes.

Media give proper acknowledgment, coverage and tribute to the persons or policemen sacrifice their lives to save the others living around them. They who understand their mission and duty and know that what is the purpose of their lives and what is the demand of their duty and what is the responsibility they themselves have taken by joining the police force is rightly and justly appreciated by the media of the state. The media cover the whole story and partake in the heart wrecking life loss.

Participation Of Politicians And Ministers In Funeral

The politicians and ministers also join the funerals and wake of the great heroes which in itself is the appreciation for the hero and his family. The rule of law prevails in Singapore and the government does not allow the people to humiliate or make fun of these heroes if someone does so, the security forces and government do not tolerate such casual behavior, mistake or crime. They stand by the heroes and their families in the time of difficulties and hardships.

Heritage gallery is one of the special places in Singapore along with many others. This place is specifically built and fixed for the memorandums of the heroes. If you visit this place you will see the history personified in it. You can view various things related to many officers who gave their lives for their land. It is a treasure of the heroes where you can see the name of every hero with his belongings.

Policemen and officers also participate in the funerals and wake of policemen funerals. They pay their regards and wishes to the departed hero. They hold the coffin of the hero towards the place of a funeral ceremony. Guard of honor is also paid the person by the policemen.

Some of the policemen or colleagues of the deceased person participate as a pallbearer in the funeral and wake. These policemen and officers also pay tribute to the dead person by saluting him for the last time. This is a beautiful way to acknowledge the sacrifice of the person and is an act of pride and self-importance. For the purpose of the funeral of these heroes, large area is taken which could be a ground or park. Because a large number of people participate in their funerals and wakes.

Rapping Of Coffin In National Flag

Think about the moment when the body is wrapped in your national flag. What a moment? What a feeling it would for the family, friends and relatives? They will feel themselves above all others. This is a type of regard and acknowledgement given to the person who had given his life for the sake of his country as well as for the people of his beloved homeland. The person who fulfills his duties and accomplished his responsibilities in an accurate way, the government also gives him esteem and respect which makes him a real hero in real sense for all others who know him.

If the officers do something great, the government gives him rewards for his heroic work for the country and if the person lost his life on his duty than he is buried with great honor. His body is taken to the place of funeral in the form of a huge procession in which high officials, officers and ministers participate and this scene make him above all in the society. This act accepts and highlights his sacrifice and tells the others that he is not an ordinary man who has lost his life for nothing, but he was a hero in his act and he proved it by his great performance for the land which impresses and inspires others to do the same in future. His contribution towards his country is celebrated by arranging various functions on national level by the high ranked officials. Medals are given to such persons for their bravery and courage.

This is the duty of the people living in every society to encourage the heroes of the society giving their lives for the safety of their people. They work round the clock for this purpose. This act and various set customs and traditions for the acknowledgement of these people not only encourage them but also inspires others to do the same and spend their lives for the sake of humanity. So these honors, rewards and awards are not only given to pay tribute to the heroes but also to show others that if they will act and do something great like this, they will also get the same honor for them too.

Can You Attend A Funeral Before The Wedding?